Technorati Profile
Posted by FreeRangeAuthor at 8:30 PM No comments:

If you've ever had the creeping desire to be in one of those zombie movies, your chance is coming into your home via the computer game, Left 4 Dead.

2 teams of 4 human players, each, in multiplayer mayhem ...

The 4 "survivors" must battle their way to a safety exit to win, plowing through hordes of AI zombies.

The multiplayer twist is that 4 zombie bosses, controlled by 4 other human players, have unique powers to defeat the "survivors".

The online play looks to be insanely frantic. Take a look at this fist full of video previews.

Try not to drool on your keyboard.

I'll be playing as zombie - who doesn't want to use the special vomit attack?
Posted by FreeRangeAuthor at 5:09 AM No comments:

You can now track my movie vote ratings on IMDB.

You may need to create a free user account on IMDB to view the votes.
Posted by FreeRangeAuthor at 2:58 PM No comments:

** These instructions are for the DoW games not installed from the STEAM service. STEAM uses a different file and folder structure than the DoW games you install from boxed retail. Post a query on the STEAM user forums about where to put autoexec.lua for any DoW game from STEAM. Also, see this screen toggle code on the STEAM forum. **

Use a game startup icon without -dev command line option.

The screen toggle will only work when you are playing on a map (or a replay of a map). It does not work at any main menu screen.

(BELOW - click image for full size) Here is the location of autoexec.lua (Dark Crusade); put in same folder with game .exe for DoW 1 or DoW-Winter Assault ... 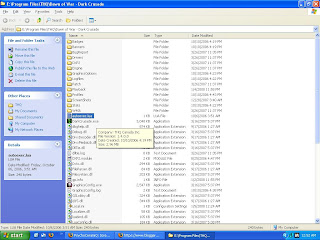 (BELOW - click image for full size) Here is the notepad image of the text contents for autoexec.lua ... 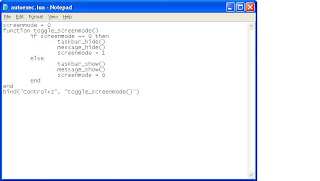 Posted by FreeRangeAuthor at 9:57 PM 4 comments:

Memorable music scores are most often associated with films. More and more computer game developers are hiring sophisticated composers to write for their games.

Here are a few off the top of my head which have superb music scores to rival the best film scores ...

Dawn of War - one music track as page background playback. Each faction gets it's own signature score as well as context sensitive music tracks during a game.

Saga - just ran across this, when the game is not yet released. Click the My Nation menu link to load the Flash to hear several music tracks. Really outstanding score.
Posted by FreeRangeAuthor at 1:28 AM No comments:

In my 50th year, this is perhaps the most viscerally intense film I have ever seen. My review is short and to the point, over at IMDB, rating 10 of 10.

Because the subject matter is so intense, I recommend this only for those 12 or older.

This is a superb docu-drama that will leave you shaken.
Posted by FreeRangeAuthor at 2:05 AM No comments: